Visa Application: Apply online and generate barcode to present upon arrival in Nepal. This will greatly assist in facilitating swift immigration procedure. https://nepaliport.immigration.gov.np/online

Arrival at Tribhuvan International Airport, meet and greet by Malla Travel & Trek representative and transfer to your hotel in Kathmandu. Once you are settled in, it’s time for your Nepalese adventure to begin in earnest. In the afternoon, enjoy an informative and relaxing walking tour from Thamel to Durbar Square, the historic heart of the city. This is a great way to settle into the country and get a feel of the atmosphere. Admire famous attractions such as Kumari Bahal, a building richly decorated with beautiful woodcarvings, which is home to the Royal Kumari, a child who is a ‘living goddess’ and a manifestation of the deity, Durga. Nearby is Hanuman Dhoka, the former royal palace, whose Nassal Chowk courtyard was the coronation site of the Shah kings and contains some of the finest wood carvings you’ll see anywhere. The 14th century Jagannath Mandir is the oldest temple in the area, its steps carved with inscriptions in a various language. Close by, Taleju Mandir is one of the largest and finest temples in the Kathmandu valley and is dedicated to the patron deity of the former royal family, the wrathful Taleju Bhawani. Overnight in hotel in Kathmandu

Breakfast at the hotel is followed by a spiritual start to the day with a morning sightseeing tour taking in the Hindu Pashupatinath temple and the Bouddhanath, the largest Buddhist stupa in Nepal. Located on the banks of the holy River Bagmati, the vast Pashupatinath is dedicated to the Lord Shiva and is one of the most sacred Hindu shrines in the world. Thousands of pilgrim’s flocks to this temple every year during Shivaratri, the birthday of the Lord Shiva. There are many eye-catching elements such as the large, gilded triple-roofed temple but there is so much going on around you, with the throngs of faithful and pilgrims, that the din of hustle and bustle becomes an attraction in itself. Entrance to the main temple is limited to Hindus only. Behold the beautiful Buddhist Bouddhanath stupa, which traces its origins to King Mana Dev in the fifth century. This UNESCO World Heritage Site is one of the world’s leading centres of Tibetan Buddhism and is bedecked with traditional prayer rolls and Tibetan prayer flags. The afternoon is dedicated to exploring Durbar Square in Patan, a historic city just a few kilometres south of central Kathmandu. This traditionally Buddhist bastion – they make up about one-sixth of Nepal’s population – is a veritable Oriental treasure trove where Buddhism and Hinduism meet, creating a fascinating architectural landscape in the Newar style. Durbar Square is considered to be one of the finest urban streetscapes in the world, the centrepiece being the palace of the Malla monarchs, who ruled Nepal for six centuries. Wander this stunning complex, which boasts a series of beautiful courtyards with ornamented windows and colonnaded arcades, temples and shrines, all noted for their exquisite carvings. Contemplate the square’s Krishna temple and Rudra Varna Mahavihar Buddhist monastery Overnight in hotel in Kathmandu

Depart Kathmandu after breakfast at the hotel, transferring to Chitwan, passing through beautiful villages and breath-taking landscapes of verdant valleys framed by majestic mountains and by the wild white waters of the River Trishuli. Arrive at your Safari Resort, located on the edge of the Chitwan National Park and by the banks of the East Rapti River. Enjoy a refreshment while the check-in process takes place and then a briefing before lunch in the resort. In the afternoon (time permitting) a naturalist outlines the programme over the coming days, which features a jungle walk, Jeep drive safari and canoeing. Then it’s time to visit a typical local Tharu Village. The Tharu people are the indigenous peoples of the Terai region of Nepal who settled down from the medieval times and developed resistance to the malarial parasite. Malaria was totally eradicated in the Terai in the early 1950s. Also visit the their cultural museum. In the evening Tharu Cultural Dance: Farmers of the nearby villages will show some of their traditional martial skills and dances. Overnight in resort in Chitwan. Breakfast, lunch and dinner included.

Jungle drive and canoe ride (subject to weather conditions & water level in the river): Drive to bagmara the bank of the Budi Raapti River at boating put in point. Start boating in a traditional patela boat for about 45 minutes which takes you on a silent trip down the Budi Rapati River to view local and migratory aquatic birds including the Ruddy-Shelled duck and other special of ducks that migrate in the winter from Siberia. The Gharial which is a local species of fish-eating crocodiles. End raft at Korshor for the entry inside the forest and start a jungle drive after the drive visit of Elephant breeding center. Overnight in resort in Chitwan. Breakfast, lunch and dinner included.

Bird Watching/Nature Walk: Wake-up call followed by tea or coffee then proceed for Bird watching/Nature walk. Out of 519 species of the birds we have recorded 276 species in our area. Our Naturalist guides will help you to identify some of the species of these birds. Breakfast at the resort. After the breakfast meet our waiting vehicle and continue drive to Pokhara which is approximatley 170Kms/6hrs drive. Head north to Pokhara in the foothills of the Himalayas, passing through lush landscapes in the shadow of magnificent mountain ranges. Arrive at Hotel Utsab Himalaya, which is adjacent to a park on the banks of Lake Phewa. Evening being free for you to either relaxes at the hotel or maybe explores the area around it. Overnight in hotel in Pokhara

Start the day on a high in every sense of the word by witnessing sunrise from Sarangkot, a 1,600-metre-high mountain in the northern shore of Lake Phewa. (This segment is subject to weather conditions.) In the flickering light of early morning, watch as the eight snow-capped peaks of the Annapurna range are bathed in a kaleidoscope of golden-hued shades – a truly awe-inspiring natural phenomenon. Tea/coffee is served at a local café in Sarangkot. Pass through the beautiful Schima-Catonopsis Forest on the way to the lookout, from where you can also enjoy views over the lake and its tributary rivers. Return through the forest – which can now be appreciated in the splendours of the natural light bursting through the branches – for breakfast at the hotel. Once replenished, enjoy a morning sightseeing tour of Pokhara city and a boat ride on Lake Phewa to the Taal Barahi temple, which is dedicated to the Hindu deity Durga and occupies a tiny tree-covered islet about 200 metres from the waterfront. See the city’s top attractions, such as the Bindyabasini temple, which is dedicated to the Goddess Bhagavathi. Spend the afternoon learning all about the summits in whose shadow Pokhara lies at the International Mountain Museum. Here you can find collections dedicated to the flora and fauna of the Himalayas as well as exhibits documenting mountain cultures and their ways of life, the local environment and mountaineering history. The museum also has a restaurant, landscaped gardens and a climbing wall. Cap off the visit at the viewing platform from where you can contemplate the three 8,000-metre-plus peaks of the Annapurna range. Overnight in hotel in Pokhara

Take to the road after breakfast at the hotel for the scenic drive to Kathmandu, passing through the bucolic Nepalese countryside and parallel to stretches of the white waters of the rivers Trishuli and Marshyangdi. Break en route in Kurintar for lunch at Riverside Spring Resort, (lunch on own arrangement) which is located on a bend in the river Trishuli. While resting at the resort, you can avail of an optional visit to the Manakamana Temple by cable car. The 2.7km-long journey climbs just over 1,000 metres and takes about 10 minutes from the bottom station to the top. The pagoda-style temple dates from the 17th century and, from the north face, you can take in the spellbinding views the Manaslu, Himchuli and Annapurna ranges. Continue to Kathmandu and upon arrival transfer to your accommodation for check in at the hotel. Overnight in hotel in Kathmandu

After breakfast at the hotel, transfer to Tribhuvan International Airport to connect with your outward flight. Breakfast included. 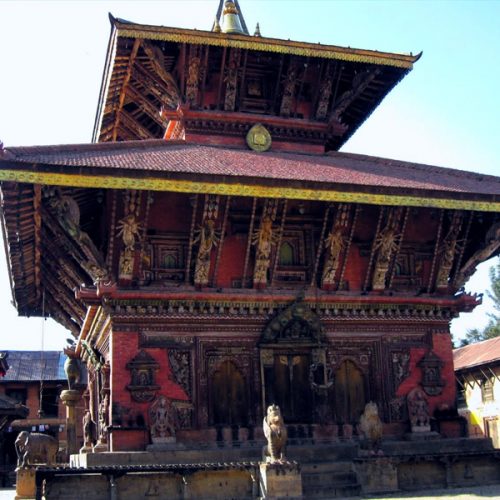 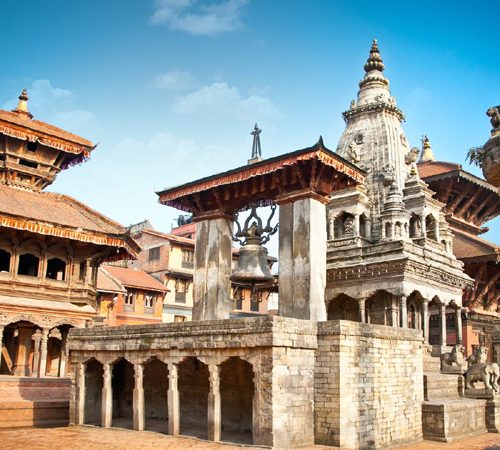 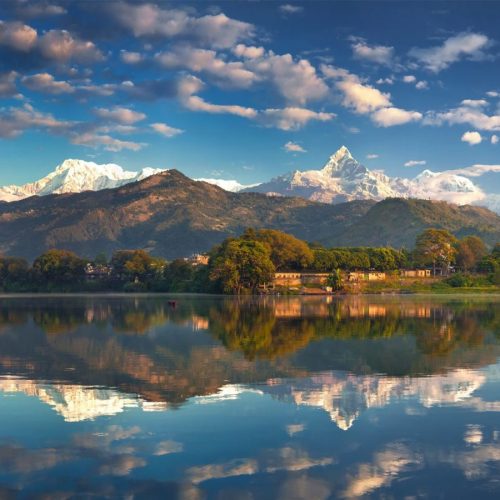 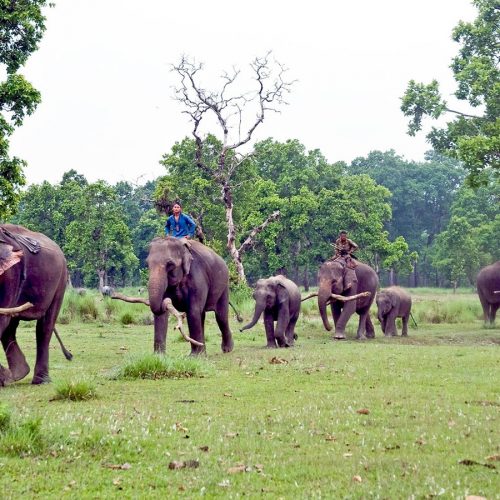 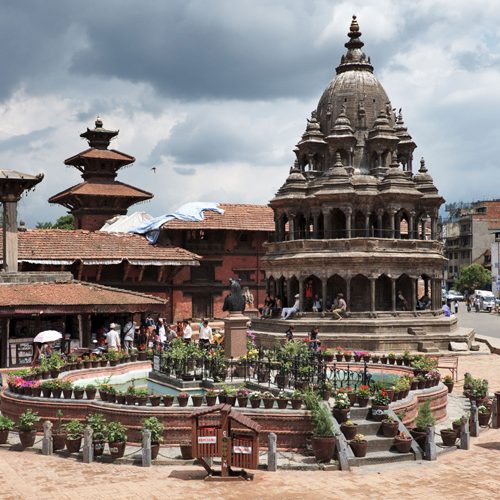 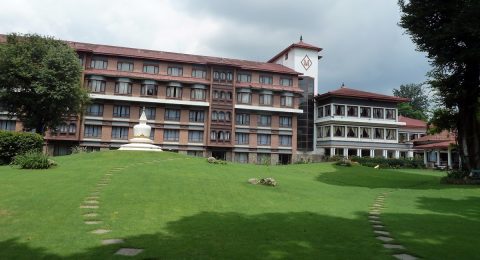 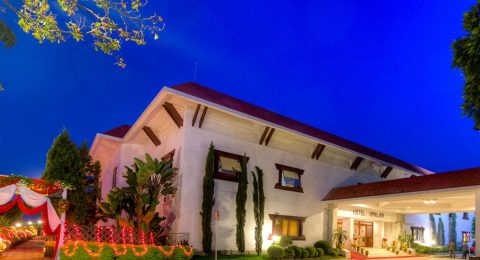 Nestled within 10 acres of exquisitely landscaped grounds, Hotel Himalaya is conveniently located 8 km away from the Tribhuban International Airport and only...