The Everest Base Camp trek is arguably the most famous trekking route in the world and this is a once in a lifetime opportunity to see some of the most breathtaking scenery imaginable. Nepal is a fascinating country and the trek gives an insight into the lives and culture of the Sherpa people. Our ascent is steady and well paced to best suit the acclimatization needed. Sunrise on the snow capped peaks above the Khumbu Glacier is an unforgettable sight from the summit of Kala Pattar. This trek is one for the lover of high places and those wanting to push themselves to the limit. It is a tough challenge and not to be taken lightly with generally well graded paths but some tougher sections along the Khumbu glacier.

Upon arrival meeting and assistance at the airport and transfer to hotel . Office representative collect 2 copies of Passport size photo and Passport copy to make the trekking permit.Rest of the day at leisure. Overnight at hotel

Breakfast at hotel AM: Sightseeing tour of Kathmandu city and Swayambhunath.Kathmandu City: Kathmandu, the capital city of Nepal, is one of the world’s oldest cities. It is also known as Kantipur. Here one can find distinctive pagoda-roofed temples, stone sculptures, old monasteries and histories monuments. Here you will visit the temple of the Living Goddess, who acknowledges the greetings of devotees from the balcony of here temple residence Kasthamandap – the source of the name Kathmandu and supposed to be made from the timber of a singe tree and Durbar Square are with it’s array of temples overlooked by the Hanuman Dhoka Palace, the ancient place of the former Nepalese Royalty. Swayambhunath: Located approximately 4 km, Buddhist stupa this is said to be more than 2000 years old, making it one of the world’s oldest and most glorious Buddhist chaityas. The Chaitya (stupa) which forms the main structure is composed of a solid hemisphere of brick and earth supporting a lofty conical spire capped by pinnacle of gilt copper. Painted on the four-sided base of the spire are the all-seeing eyes of Lord Buddha. It stands on a hill which is a mosaic of small chaityas and pagoda temples. PM: Sightseeing tour of Patan city. Patan: 5 km away from Kathmandu city, the ancient name of Patan is Lalitpur , meaning city of beauty and fine arts. It is enclosed within 4 stupas said to be built in 3rd century AD, by Emperor Ashoka. You will see the Durbar Square, the Patan Durbar which houses a bronze collection, the Krishna Temple built by King Siddhi Narsingh Malla, Hiranya Varna Mahavihar. The citiy is believed to have been built during the reign of Vira Dev in A.D. 299.

The flight from Kathmandu to Lukla takes 35 minutes . A hair rising landing on a steep mountain runway, brings us to the village of Lukla (2900m). After meeting the crew, we start your trek. You head up the Dudh Koshi Valley on a well-marked trail and then overnight at local lodge in Phakding. (Lukla Airport)

From Phakding, we cross and re-cross the rivers on high suspension bridges. Beyond Monjo is the entrance to the Sagarmatha National Park. The park was set-up to conserve this fragile mountain environment. We then ascend steeply to Namche and along the way, if the weather permits, catch the first glimpse of Mt Everest. Namche is the main trading village in Khumbu and has a busy Saturday market- a meeting place for the Hindu traders from the lowlands and the Tibetan yak caravans that have crossed the glaciated Nangpa La. You then reach the Namche bazaar.

Namche is tucked away between two ridges amidst the giant peaks of the khumbu and has an abundance of lodges, tea shops and souvenir shops. It is an ideal place to spend a day, acclimatizing to the new altitude before heading off towards Tengboche. To acclimatize, you visit Khunde Hospital set-up by Sir Edmund Hillary, or take a one hour walk up to the Everest View Hotel above Namche for the sunset view of Ama Dablam, Nuptse, Lhotse and Everest. There are also good views from the Natioanl Park Centre and Museum just above the town. (Lhotse, Nuptse and Ama Dablam From Namche)

We descend downhill through a forest, cross the Imja Khola and climb steadily to the village of Pangboche. The village is directly opposite Ama Dablam (6856m), and has exceptional views of the mountain, with the gompa, Mani walls and scattered pine trees in the foreground. A further two hours walk us to Pheriche.

A day for rest and acclimatization. We also to wander up the valley to look at a lake, the Tshola and the perpendicular walls of Cholatse and Tawache. We can climb up onto the ridge overlooking Dingboche for the view of the Imja Valley and the incredible south face of Mt. Lhotse.

We continue up the wide valley beneath the impressive peaks of Cholatse and Tawache on the left. We then right and take a steep climb towards the foot of the Khumbu Glacier. The tea house at Duglha is a good spot to have lunch. The trail zigzags up through the boulders of the glacier’s terminal moraine. At the top of this there are many stone cairns, built as memorials to the many Sherpas who have died while climbing Mt. Everest. the path then climbs gently along the glacier, to eventually reach the cluster of houses at Lobuche.

A very early start is required to reach the Everest Base Camp. It takes several hours as the trail weaves its through ice pinnacles and past the crevasses of the Khumbu Glacier. On the return leg, we can take a higher route to get a spectacular view of the Khumbu icefall and the route to the South Col. We return to either Gorak Shep or Lobuche. Everest Base Camp

Today’s trek is mostly downhill. As we retrace our steps to Duglha and descend to Pheriche, we arrive at The Himaloayan Rescue Association, a trekker’s aid post and worth a visit. After lunch we cross the Khumbu Khola on a wooden suspension bridge and follow the Imja Khola to the village of Pangboche.

We continue to follow the river and, after crossing it, climb back up through birch and rhododendron forest to Tengboche. Kwangde, Tawache, Everest, Nuptse, Lhotse, Ama Dablam, Kantega and Thamserku are just a few of the Himalayan giants to be seen. From Tengboche descend to the bridge over the Dudh Kosi. At Phunki Tenga, we get to see the water driven prayer wheels, before making our way back to Namche.

Our final day’s trekking follows the Dudh Koshi back down to Lukla. This last evening in the mountains presents an ideal opportunity for a farewell party with the Sherpa guides and porters. We get to sample chang (local beer), try some Sherpa dance steps and end the trek on a merry note.

Fly back to Kathmandu o/n Hotel

After an early breakfast, we head to the airstrip for our return journey to Kathmandu, installation in the hotel.

Breakfast at hotel .Rest of the day at leisure till departure Later transfer to airport to board the flight for onward journey. 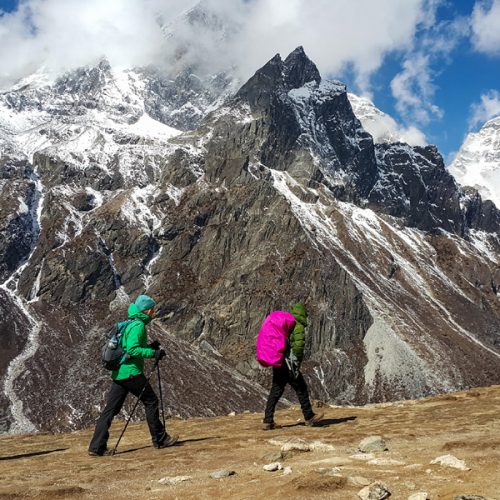 People have settled in the Kathmandu Valley for over 2000 years. Throughout this period, the valley has witnessed the migration of people from... Radisson Hotel Kathmandu, located in the heart of Nepal’s thriving capital, places you close to corporate offices and popular attractions like the entertainment... Hyatt Regency Kathmandu is a 5 star luxury hotel and resort in Kathmandu and is set on 37 acres of landscaped grounds, created... Discover the relaxed atmosphere and upscale amenities of GAJU SUITE . Our efforts are focused on providing guests a holiday to be treasured...